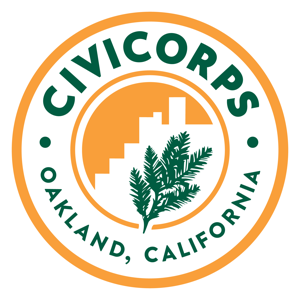 OAKLAND — Withelma “T” Ortiz Walker Pettigrew spent her childhood bouncing from one foster home to another — 14 of them by the time she was 18. From age 10 to 17, she was sexually exploited by human traffickers in Oakland and spent her 17th birthday in juvenile hall.

After a traumatic upbringing, she enrolled in Civicorps, an Oakland charter school that transformed her life.

“It’s a place that accepts you and meets you where you’re at,” said Ortiz, now 28, who goes by T. “I only started to find out who I was and the ways I liked to be treated when I went to the Corps.”

She’s now a junior on the dean’s list at Morgan State University in Baltimore. In 2014, Time named her one of the 100 most influential voices for her activism on behalf of child trafficking victims, and she has testified before Congress.

T is among the 1,500 Civicorps graduates in the past 15 years who have gotten their high school diplomas at the charter school and gone on to college or found steady work using the skills they learned through the program.

The West Oakland nonprofit received funding this year from Share the Spirit, an annual holiday campaign that serves needy residents in the East Bay. The grant is administered by the Contra Costa Crisis Center, and donations support programs of more than 40 nonprofit agencies in Contra Costa and Alameda counties.

The Civicorps program accepts anyone between the ages of 18 and 26 who doesn’t have a diploma. The students follow a personalized instruction program at their own pace, taking between nine months to several years to finish if they drop out and return. Civicorps staff help students find housing, food, child care, navigate the criminal justice system, and provide college counseling. The participants are introduced to yoga and outdoor adventures such as trips to Yosemite. Those who need it receive trauma counseling.

Students are assigned to work crews where they learn jobs skills and earn income.

“I am addicted to power tools — I really love the chainsaw,” said Eboni Route, 23, who plans to graduate in April.

Route said she is determined to complete a scythe program after one of her best friends was killed in gun violence in October.

“I needed to finish my diploma for her because she really was trying to help me go to school,” Route said.

In fiscal year 2015-2016, 50 percent of the students had been formerly incarcerated, 32 percent were victims of violence, 50 percent were homeless, 24 percent had been in foster care, and 99 percent were low-income. About 73 percent of participants finished the program and went on to college or to a job. Sixty-one percent were African-American and 26 percent Latino. More than one-third are parents.

“We’re showing that students … other people have rejected are the ones who can achieve and achieve at a high rate,” said Executive Director Alan Lessik, noting that a recent Civicorps evaluation study found that all of the students had comparable graduation rates, including foster youths who only average a 50 percent completion rate in traditional high schools.

Antoine Penn’s mother was shot and killed in Oakland in 2003 when he was 16. Penn, now 30, said he dropped out of McClymonds High School and started selling drugs to help care for his five younger siblings. An arrest for robbery landed him in juvenile hall.

When he turned 18, Penn enrolled in Civicorps because he had seen how the program changed his cousin’s life. But the trouble he had gotten into on the streets followed him.

“I got shot at and I was like, ‘All right, I know my mom is already not here and my little brothers and sisters are looking up to me for guidance,”‘ Penn said.

He told the supervisors at Civicorps that his life was in danger. They recommended he leave Oakland and join the California Conservation Corps, an organization where young people between the ages of 18 and 25 sign up for a year of working outdoors to help improve California’s natural resources. Penn moved to Ukiah and spent eight years as a wildland firefighter and crew supervisor. Two years ago, he returned to Civicorps and became a job training supervisor.

“Civicorps really helped me push past what I thought were my limits and push farther,” Penn said. “The thing that makes Civicorps such a great place is it’s a safe community; just people showing care and compassion. You don’t really get that everywhere.”

Civicorps job training supervisor Antoine Penn poses with the cadets he is supervising for a photograph in Kensington, Calif., on Wednesday, Oct. 18, 2017. Penn at the age 16 lost his mother to violence in Oakland and wound up falling in with the wrong crew. Penn, left to care for five younger siblings discovered Civicorps, a West Oakland non profit whose mission is to help at-risk young adults get back on track by earning a high school diploma, getting job training skills and going to college.

A Day in the Life of Our Truck Drivers

Harris named Corpsmember of the Year!